The Urban Agriculture Initiative (UAI) was incubated by the JICP and is now a registered NPC.

The UAI came about through the coordination by the JICP of various individual efforts happening in the city at the same time;

Farms in the sky over Joburg
By Lucille Davie

There’s green things sprouting high in the sky in the Joburg inner city. Those things are spinach, basil and lettuce, planted in hydroponic farms on skyscraper rooftops as part of a project called the Urban Agriculture Initiative (UAI).

The UAI has been developed by the Johannesburg Inner City Partnership (JICP) with support from the City of Johannesburg, the Department of Small Business Development, the Small Enterprise Development Agency, and SAB Kickstart.

One of the initiators of the UAI, Dr Michael Magondo from WIBC and a director of JICP, believes that the “UAI is not about putting the farm on the roof, it’s about the lives that can be changed.”

The plants are grown in a medium that holds them upright while their roots reach through the pot into a tray below, filled with nutrient-rich water. Plastic sheet-roof tunnels keep them warm in winter, and protect them from storms and hail in summer. The sheeting can be rolled back to release heat.

Mamagole already has a market for the plants, and will then plant her second batch. “I have been taught to look for a market for my produce before I grow anything,” she explains.

She is a graduate of the Wouldn’t It Be Cool (WIBC) incubator, a programme that seeks to take young people aged 18 to 35 and to turn them into entrepreneurs. So far 22 entrepreneurs have been trained, and 25 are receiving training. It has as its mission to “foster job creation though the creation of an urban agricultural entrepreneurial ecosystem supporting young black, urban farmers”.

It was launched in October 2017 with Nhlanhla Mpati’s farm, bursting with lush basil, on the roof of the Minerals Council South Africa building in Main Street. He started with 300 plants and in just over six months he had 1 000 plants eagerly waiting delivery to nearby restaurants. He calls his enterprise Gegezi Organics, and in just 66m² of rooftop space and 21 days he has produced 110kgs of basil.

Shortly after that, property management company Afhco created a large farm on its Stannop building. One of the rooftop farmers is Mapaseka Dlamini, whose garden overflows with gourmet lettuce and basil plants. She now employs four people and supplies restaurants in Maboneng.

Other farms are in Hillbrow and Newtown, with rooftops supplied by the Outreach Foundation, the Jozi Housing Company, and the Joburg Land Company. There are two farms on the rooftops of FNB Bank City in the CBD.

The training that entrepreneurs undergo is intense. Before they are given their starter packs of seedlings, pots, irrigation systems and pumps, they have to present a business model, with financial support from the WIBC.

The goal for this year is that 60 people will be trained, with 25 farms flourishing on rooftops. Some 120 jobs should have been created, plus 280 part-time jobs. Agri-processing – like making pesto sauce – is a part of the vision, with nine agri-processing operations hopefully up and running by the end of the year. Long term it is hoped that 60 entrepreneurial businesses – some farms, some agri-processors – will have been created. And the initiative should see incubators set up in Tshwane, Alice and East London in the Eastern Cape, Durban, and Mbombela in Mpumalanga.

“The JICP has played a role in incubating, facilitating, and enabling this project. It is this work that has been initiated in the inner city with a view to perfecting it there and then replicating it elsewhere in the city and indeed in the country,” says Anne Steffny, a director at JICP.

On 11 October 2017 the UAI launched on the rooftop of the Chamber of Mines building in Hollard Street, Marshalltown. Nhlanhla Mpati of Gegezi Organics originally started out with 300 basil plants and just over 6 months later has expanded to 1000 plants. 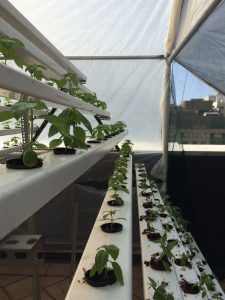 Mpati’s basil farm on the Chamber of Mines rooftop

Mpati’s produce supplies the City Perk Café just over the road from the Chamber of Mines building and Gouhlas Cuisine. The quality of Mpati’s basil is ensuring
that there is a healthy demand for his produce.

AFHCO’s Stanop building is the location of the second rooftop farm to take shape as part of the UAi. Mapaseka Dlamini of Green Sky Rooftop Garden has one of the largest, if not the largest rooftop farms in South Africa. With more than 3000 gourmet lettuce and basil plants, Dlamini employs four people and supplies restaurants around Maboneng.

The entrepreneur incubator, WIBC manages the process of identifying and training potential Urban Farmers. Out of the first group of applicants, WIBC has assisted a number of entrepreneurs develop business models in other parts of the value chain. Some exciting new business are earmarked for launch developing sauces and processed agricultural products. This eco-system of entrepreneurs is exactly what the UAI is all about.
May is a busy time with at least four farms being completed and handed over to farmers. This will include farms in Hillbrow and Newtown. We are pleased to acknowledge the support of new property owner stakeholders, The Outreach Foundation, Jozi Housing Company and Joburg Land Company who have all concluded agreements to provide rooftops for these new farmers. 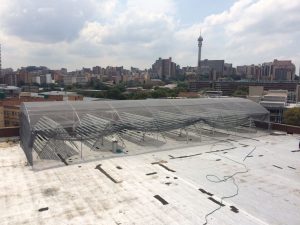 The second group of 25 potential farmers are also set to start their training at WIBC by the end of the May. Anyone interested in participating in the final group of 25 must apply early as seats are limited on the programme and they fill up quickly. Contact Colleen Mokoena from WIBC colleen@wibc.biz

Property owners with suitable rooftops who would like to take part in this initiative to create jobs, improve food security and develop skills are welcome to contact Colleen Mokoena from WIBC colleen@wibc.biz

The Urban Agriculture Initiative (UAI) has been developed by the Johannesburg Inner City Partnership (JICP) and a number of key stakeholders in the public and private sector to address issues of food security in the inner city and to assist in job creation for entrepreneurs.

One of the initiators of the UAI, Dr Michael Magondo from the entrepreneur incubator Wouldn’t It Be Cool (WIBC) believes that,

“The UAI is not about putting the farm on the roof, its about the lives that can be changed.”

WIBC is constantly seeking new ways to expand the supplier base for businesses. An eco-system of urban farms means more opportunities for the entrepreneurs that build the hydroponic infrastructure for the farmer, and more business for the entrepreneurs that supply materials to build the infrastructure. The potential knock on benefits of the project are the reasons why all the stakeholders are so excited to see new farms cropping up across the city.

The launch of Nhlanhla Mpati’s basil farm took place on Wednesday 11 October 2017 at the Chamber of Mines building on Hollard Street. 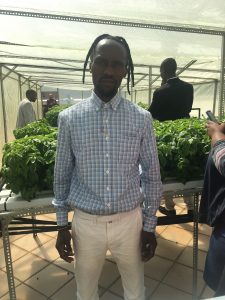 Dating back to the very beginnings of Johannesburg, the Chamber of Mines has occupied their building in the inner city for the past 93 years. As Harry Groenewald mentioned in his address to the press, the Chamber is in full support of new technologies that broaden the opportunities available to the people of Johannesburg and South Africa.

Utilising hydroponic technology, Mpati has been able to achieve impressive results in a short space of time for his enterprise, Gegezi Organics. His rooftop farm measures 66m2 and has produced 11okgs of basil in 21 days. And there is still room to expand and the potential to employ two more people. 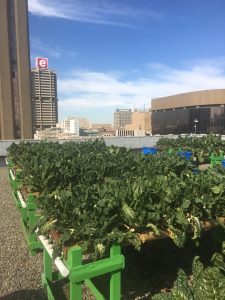 Spinach growing on the rooftop of FNB Bank City